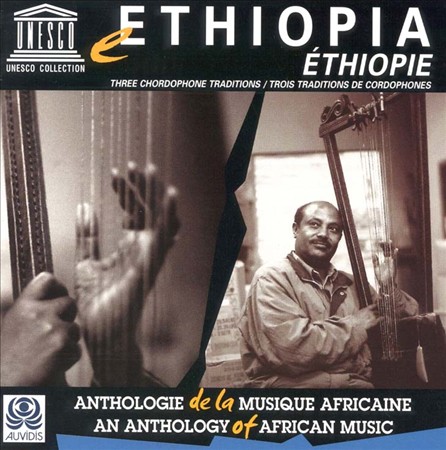 Born in 1950 in Entoto, near Addis Ababa, Alemu Aga has played the Ethiopian traditional lyre begenna since he was 12, having been trained by a famous master, Aleqa Tessama Wolde-Ammanuel, who was his neighbour and teacher at his school.


Graduated from the Addis Ababa University (in geography), he taught the begenna at the Yared Music School until 1980. He now teaches on a voluntary basis and focuses on his researches about the begenna.

He has published numerous audiotapes and several CD's and appeared in concert worldwide. Nowadays, Alemu Aga is the most highly respected Begenna player of Ethiopia. 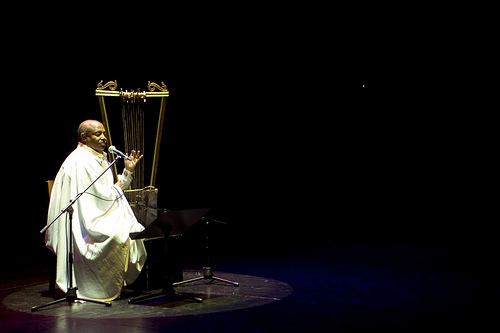 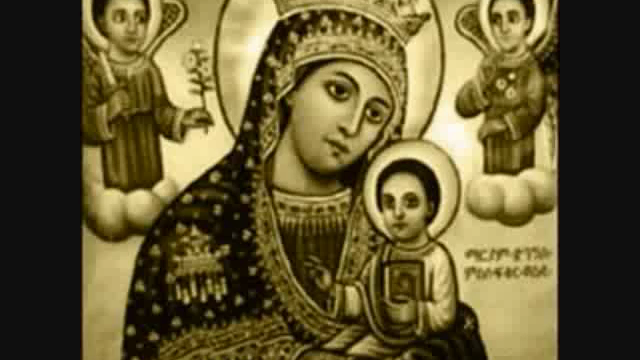 Mezmur are the religious songs of the Ethiopian Orthodox Church. Mezmur is the Amharic term for music, although it often has a religious connotation. Other religious groups also use the term, which is in contrast with zafan, or secular music.

The Ethiopian Orthodox Church is one of the oldest Christian churches in Africa, and it dates to pre-colonial times. As of 2015, it has between 40 and 45 million members. It has also spread outside Ethiopia, with many branches in the United States and other countries where Ethiopian immigrants have settled.

It has a rich musical tradition, referred to as mezmur. Mezmur plays an important part in church services, including a detailed liturgy divided into two parts and 14 sub-parts known as anaphoras. These fixed songs undergo few changes.

Mezmur can also refer to hymns, which are more innovative, and the church continues to accept and use new hymns. These are more free-form songs of praise. Many Ethiopians take great pride in their music and strive to create beautiful songs as a sign of devotion.

Mezmur is not purely Ethiopian Orthodox. It can refer to any religious song. The P'ent'ay, or Ethiopian protestants, also use the term mezmur. The P'ent'ay can include Pentecostals, Baptists, Mennonites and many others.

The begena is an Ethiopian or Eritrean string instrument with ten strings belonging to the family of the lyre. According to oral tradition, Menelik I brought the instrument to the region from Israel, where David played on it to soothe King Saul's nerves and heal him of insomnia. Its actual origin remains in doubt, though local manuscripts depict the instrument at the beginning of the 15th century (Kimberlin 1978: 13). 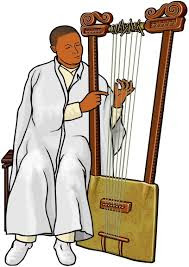 Known as the instrument of noblemen, monks and the upper class and performed by both men and women, the begena was used primarily as an accompaniment during meditation and prayer. Though commonly played in the home, it is sometimes played in the framework of festive occasions. During Lent, the instrument is often heard on the radio and around churches. Begena is accompanied by singing voice only. The singer may compose his or her own texts or they may be taken from the Bible, from the Book of Proverbs, or from the Book of Qine, an anthology of proverbs and love poems. Subject matter includes the futility of life, the inevitability of death, saints, mores, morality, prayer, and praises to God. The song's duration varies according to the text, the audience, and the persistence of the player. Though many texts are of a religious nature, the instrument is not used in the Ethiopian Orthodox church services, even if it is seen occasionally in religious processions outside the church.

Because of the instrument's relatively intimate and sacred role in society, the begena is not common to find. Meditation and prayer are very private, personal endeavors, and hearsay suggests that the instrument is played by very few and is a dying art. However, in 1972, the Yared Music School in Addis Ababa began formal instruction in the begena. Since 2004, evening courses are organized and the begena is still played. 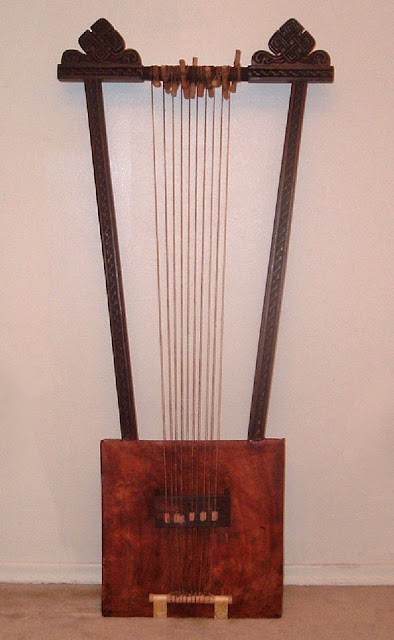 When all ten strings are plucked, one method of tuning the begena is to tune each pair of strings to one of the pitches in a pentatonic scale. When using five of the stings, only the first, fourth, sixth, eighth and tenth strings are tuned and plucked to give sound. Finally, while playing the begena using six strings, the left hand plucks strings one, three, four, six, eight, and ten (starting from the left side when facing the instrument). The pointing finger plucks strings three and four while the other fingers are in charge of controlling one string each. The remaining strings are used for the finger rests or stops after the strings have been plucked, allowing the plucked string to vibrate.

The begena may also be played using a system called girf, wherein a plectrum made of horn or wood is used to pluck the ten strings of the begena. Megabe Sebhat Alemu Aga plays begena both by using his fingertips and girf.

The begena is characterized by a very specific buzzing sound, due to U-shaped leather pieces placed between each string and the bridge. The thong for each string is adjusted up or down along the bridge so that the string, when plucked, repeatedly vibrates against the edge of the bridge. 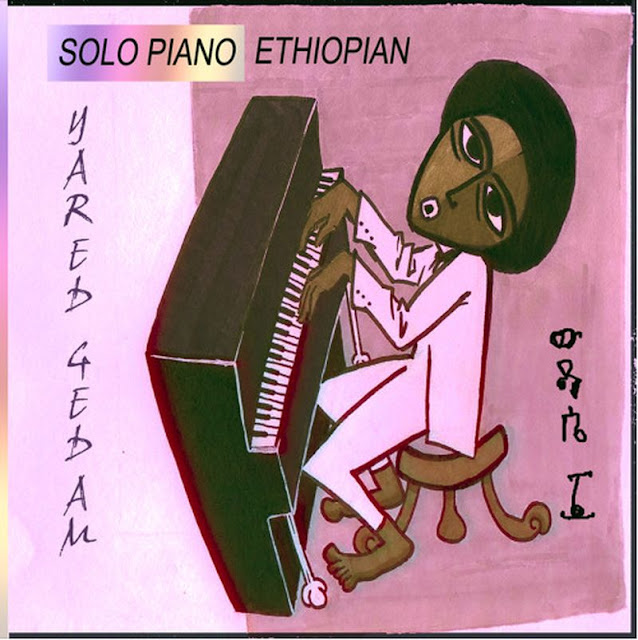 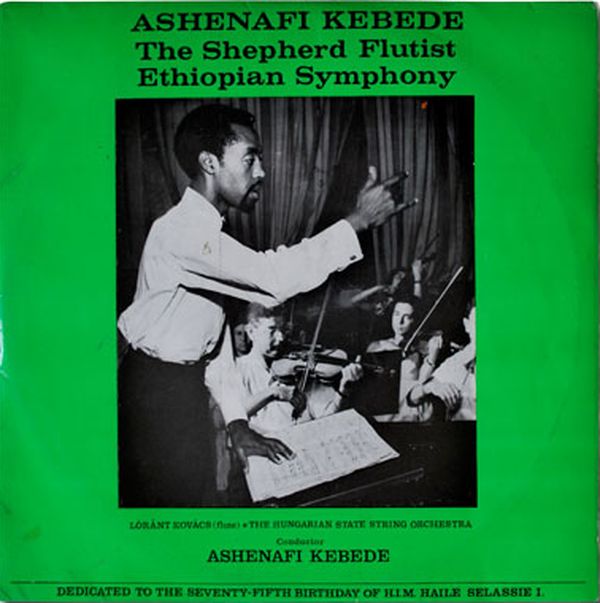 He founded the National Saint Yared School of Music in Ethiopia, serving as its first director (1963–1968).

He was designated a National Composer by Ethiopian Emperor Haile Selassie I, in 1967. Shortly after that he began his graduate studies in the United States, and earned the first Ph.D. in ethnomusicology at Wesleyan University.

Ashenafi was a prolific writer. His works include a novel, Confession (1964), articles in ethnomusicology journals, the book Roots of Black Music, and numerous articles in The Chronicler, the magazine of the Center for African-American Culture.

In his own compositions he combined Ethiopian and Japanese musical ideas. "Koturasia" is one such piece, written for flute, clarinet, violin, and Japanese koto. Among his other musical compositions were "Peace unto Ethiopia" and "The Life of Our Nation". His best known composition though rarely heard outside Ethiopia was "The Shepherds Flute", performed in 1968 with Hungarian State String Orchestra. 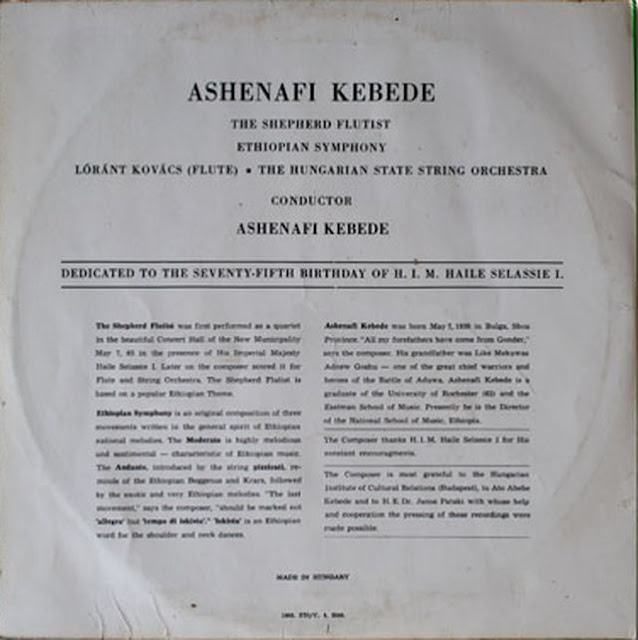 Professor Kebede died in Tallahassee, Florida, May 8, 1998. As spoken by the man, "you are here for me, I am not here for you." 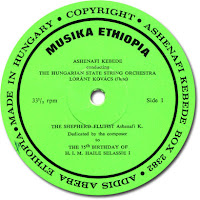 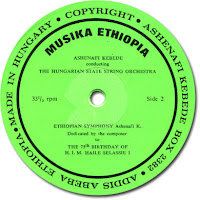 The Ethiopian Symphony was dedicated to the 75th birthday of H.I.M. Haile Selassie I. 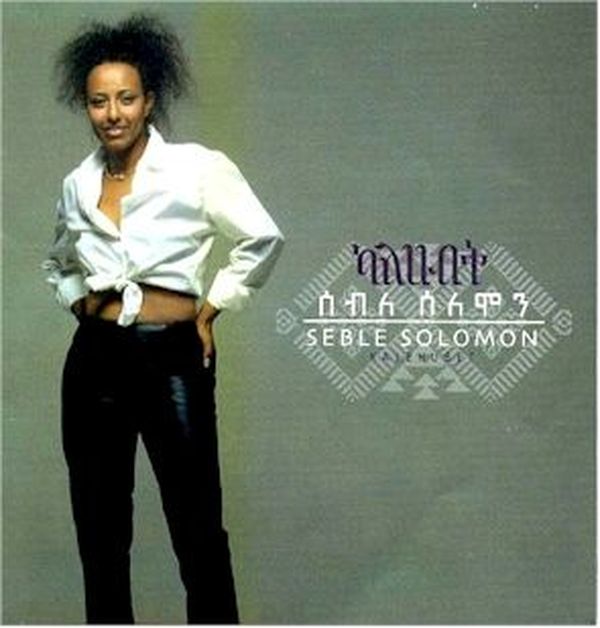 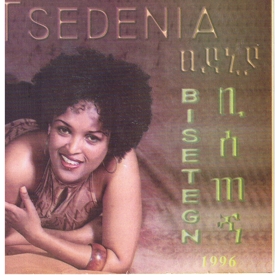 Tsedenia Gebremarkos is an Ethiopian artist. She has released songs about HIV/AIDS. She shared the prize for best East African female at the Kora Awards in 2004 for the song "Ewedhalehu", with Achien'g Abura (Kenya) for her song "Toto Wangu.

Tsedenia has recently worked with the Ethiopian dub band Dub Colossus. They released an EP, 'A Town Called Addis' in June 2008 through Real World Records and a full length LP album of the same name was released in August 2008 exclusively through the Bowers & Wilkins Music Club.

She also sang two songs on the album Punt (Made in Ethiopia) by Invisible System released on Harper Diabate Records and produced by Dub Colossus cousin Dan Harper. 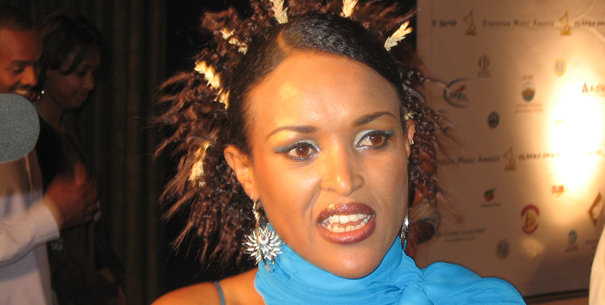 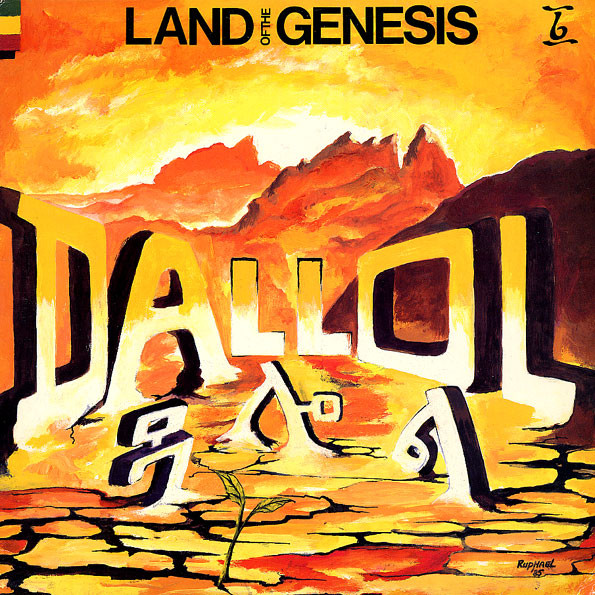 Dallol - Reggae In The Moonlight

After fleeing their homeland of Ethiopia in the late ’70s to avoid conflict with the Marxist government, a trio of reggae musicians made their way to the United States.
Landing in Chicago, the three musicians began playing their African and Jamaican-flavored jams in reggae clubs around the city.
Fronted by singer/guitarist Mulu Gessesse, the band consisted of Mulu’s brother Zeleke Gessesse and close friend Meluka Retts.

In 1980, the band assumed the name Dallol, and put together a demo tape. Dallol gained a sizable following in Chicago quickly with its distinct Ethiopian-flavored sound. The demo soon found its way all over the country, outside of the United States, across the Caribbean and into the hands of a certain famous family in Jamaica.

“It was 1981, right after Bob (Marley) died,” Mulu recalled. “Our tape made its way to Rita (Marley), and she asked us to go on down to Jamaica. That was our first contact with the Marleys.” 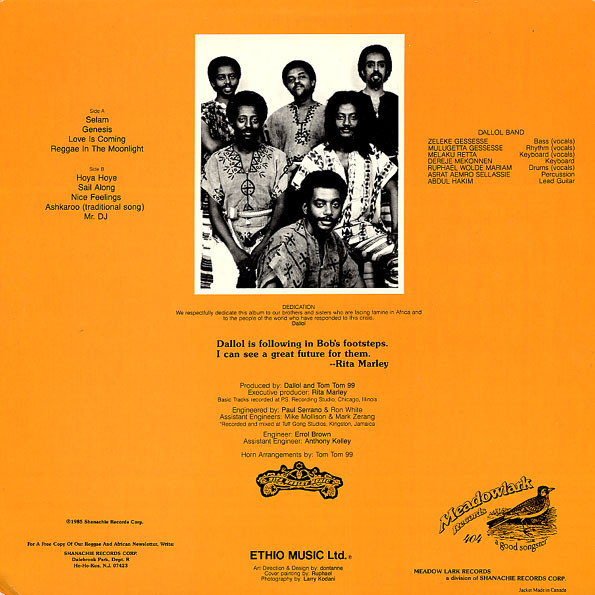 Contacts with the first family of reggae proved to be a good thing for Dallol. Rita Marley produced the band’s first full-length album and helped the band out in a number of ways. Lodging and other commodities were provided to Dallol by the Marleys as the band made its tour of the islands.

It wasn’t long before the Marleys became more than contacts, with friendships forming between Dallol and Bob’s son, Ziggy Marley. “Ziggy was only 10 years old when we met him,” Mulu explained. “As a matter of fact, he played his first show with us.”

Good ties with the Marleys continued, and soon Dallol was asked to tour with Ziggy’s newly formed band “Ziggy and the Melody Makers.” Dallol’s Ethiopian and reggae roots served as a perfect backdrop to Ziggy’s continuation of his father’s style and heartfelt messages.

In the late ’80s, Dallol toured and recorded with Ziggy. The result of the combined effort was heard worldwide. One platinum and one gold album elevated Dallol to superstar status in the reggae industry.
“That experience was great because it enabled us to go all over the world,” Mulu said.

After about five years with Marley, Dallol returned to its second home in Chicago. Included in the move were a couple line change ups and a change of name for the group. Upon the addition of three more members, including two female vocalists, Dallol changed its name to Baaro. 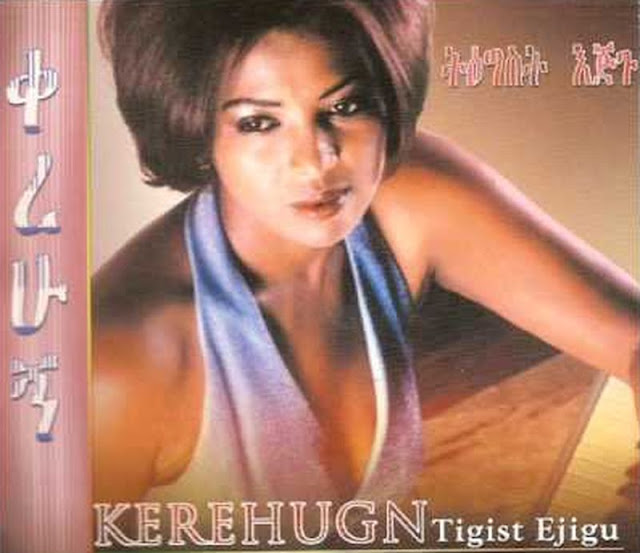 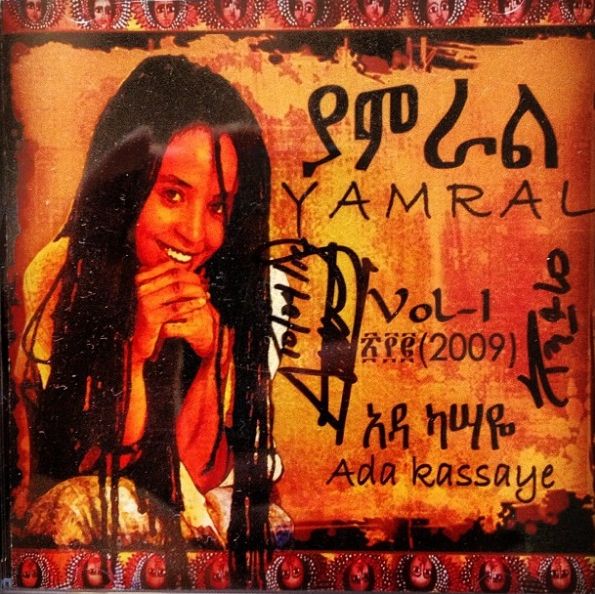 Born 34 years ago in Adama, an Ethiopian city also known as Nazret, Ada Kassaye came to Oakland 15 years back to join her mother and several of her brothers and sisters. She first attracted attention in Northern California’s large Ethiopian community through her effusive dancing at cultural events and is now hoping to follow in the footsteps of such Ethiopian singers as Aster Aweke and Ejigayehu “Gigi” Shibabaw, both of whom lived in the Bay Area prior to finding international fame.

Many of the songs on “Yamral” reflect Kassaye’s homesickness for Ethiopia. She has been back twice since moving to California and hopes to return soon in the wake of her CD release. Family members in Ethiopia, she says, “called me and told me, ‘I heard you on the radio today.’”
“I’m happy,” she adds. “The door is open for me.”