The Qaraami (also known as somali jazz) genre arose in the 1940s as the main style of modern Somali popular music, carrying features of the regional music such as the use of a a pentatonic scale and having the oud as the primary instrument, but also fusing outside influences: at first Traditional Arabic Pop, and then throughout the 1960s and 1970s Jazz, Soul and Funk.

The Waaberi ensemble, established by the Ministry of Information and National Guidance, was present since the genre's inception and served as training ground for many of the biggest stars of Somali song such as Magool and Maryam Mursal.

Qaraami acquired a political character throughout the government of Siad Barre, with many artists either praising the regime producing "revolutionary music" sponsored by the government or singing protest songs. Qaraami songs are still highly popular in Somalia. 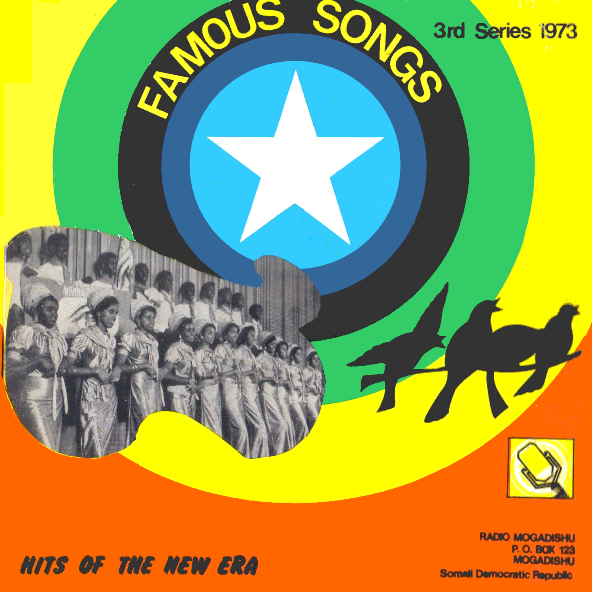 The fact that Tsehay Yohannes (ፀሃየ ዮሃንስ) has not been featured on the voluminous Ethiopiques series is a testament to the richness of Ethiopia's musical history.

Born in 1961, Yohannes (also spelled Yohanis) started singing for the Kebur Zebegna band at age 14 and recorded his debut album, Tey Munit, in 1974. He later played with the Roha Band and Dadimos Band. 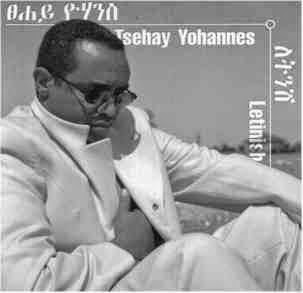 Having grown up in Tigrai but born in Gondar, Yohannes sang both in Amharic and Tigrinya and promoted cultural unity in his lyrics. Great dissension remains today between separatist Eritreans, Habesha, and Ethiopians alike. Because Amharic is considered an invasive language to the other cultures, illiteracy is a complicated issue in Ethiopia. Yohannes' hit song "Berta Zemede," a tribute to activist Edeget Beheberet Zemecha, became the official theme for the the "Manbebena Mestaf" and "Meseret Temehert" movements which almost doubled the literacy rate of the country in the 70s and 80s.

Tsehay Yohannes has yet again graced Ethiopian music lovers everywhere with another impeccably crafted album. For the past few decades Tsehay has continually indulged his fans with his own brand of music that sets him apart from all other artists in the music industry.

His rich blend of traditional Ethiopian melodies and modern rhythm has again left his fans in awe at his musical talent and unsurpassed vocal ability. He is delighted at now being able to entertain his fans with what can be described as one of his best ever musical projects, in a career which has spanned several decades.

Tsehay is arguably one of the most gifted Ethiopian artists of his generation and has proved to be an inspiration for many of the up and coming young artists of today. With the song and music video named ‘Beanew Bey’, otherwise known as ‘Welayta’, he serves to express his love and admiration for all cultures and traditions that encompass Ethiopia. The entire album provides listeners with a variety of traditional styles that convey Tsehay’s patriotism and love for his country and his people. This is a wonderful album which will be sure to be popular amongst all Ethiopian music enthusiasts. 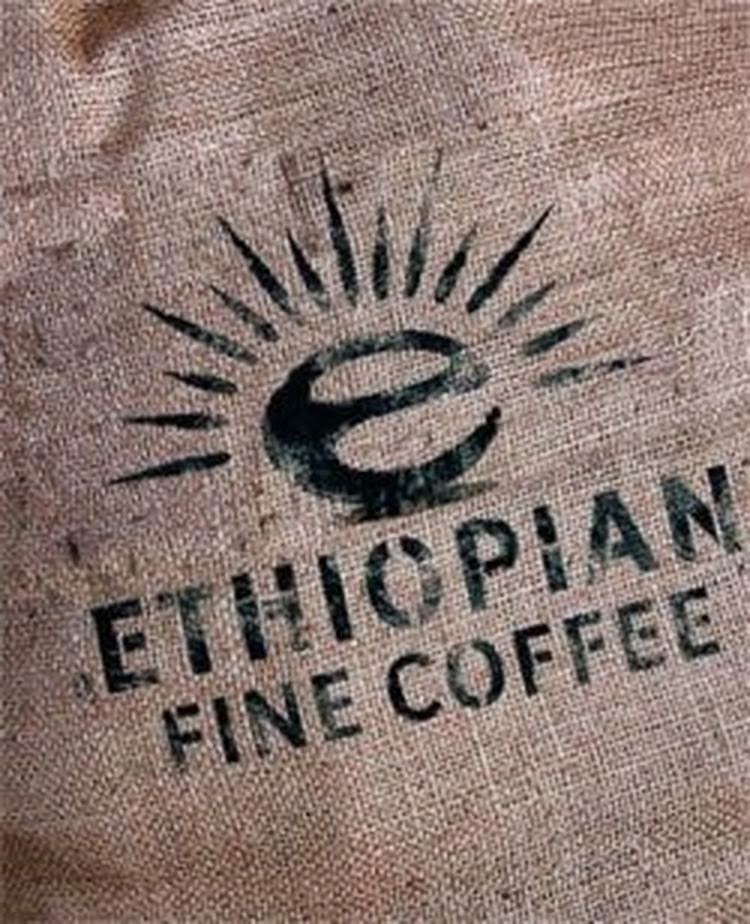 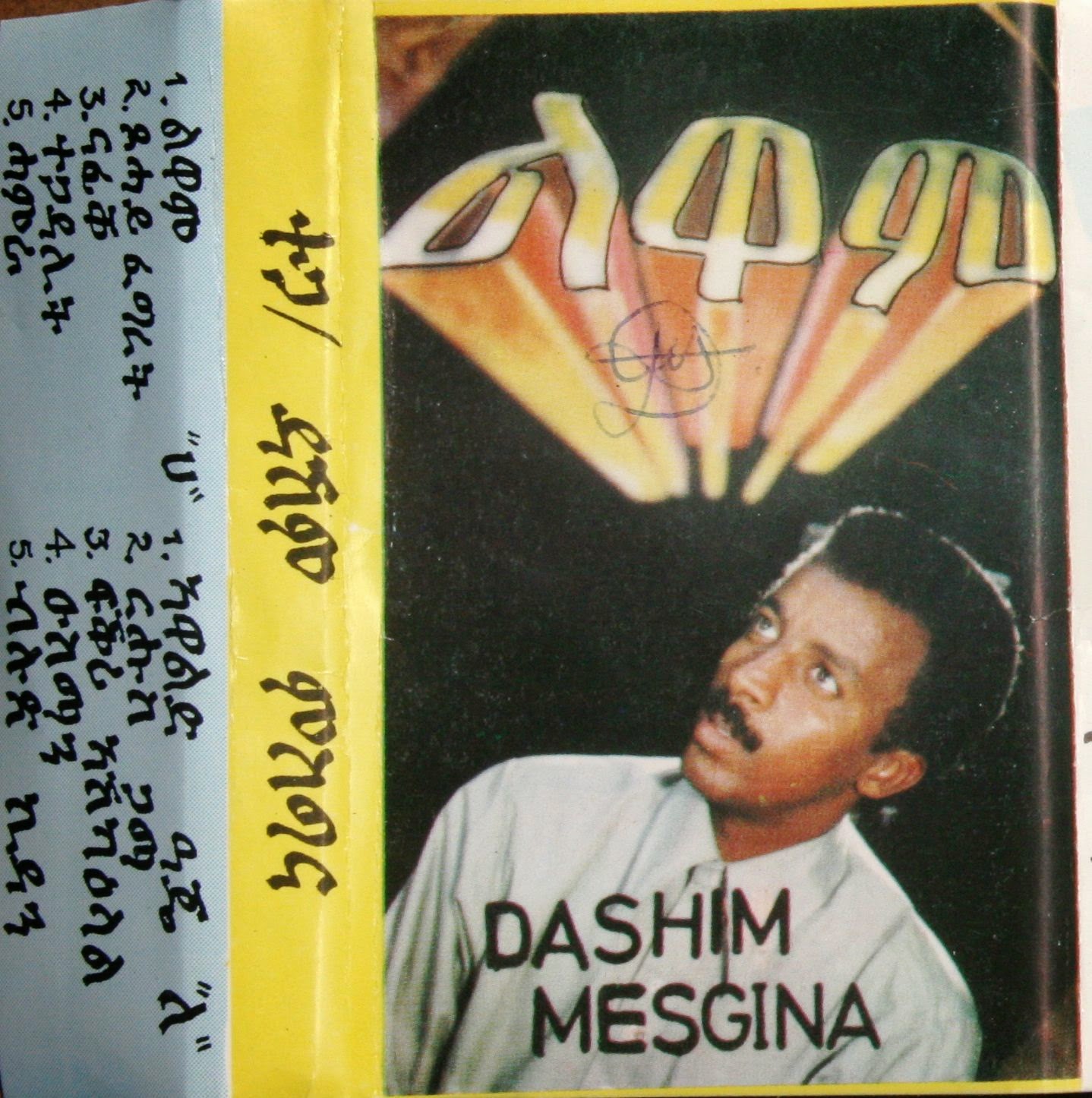 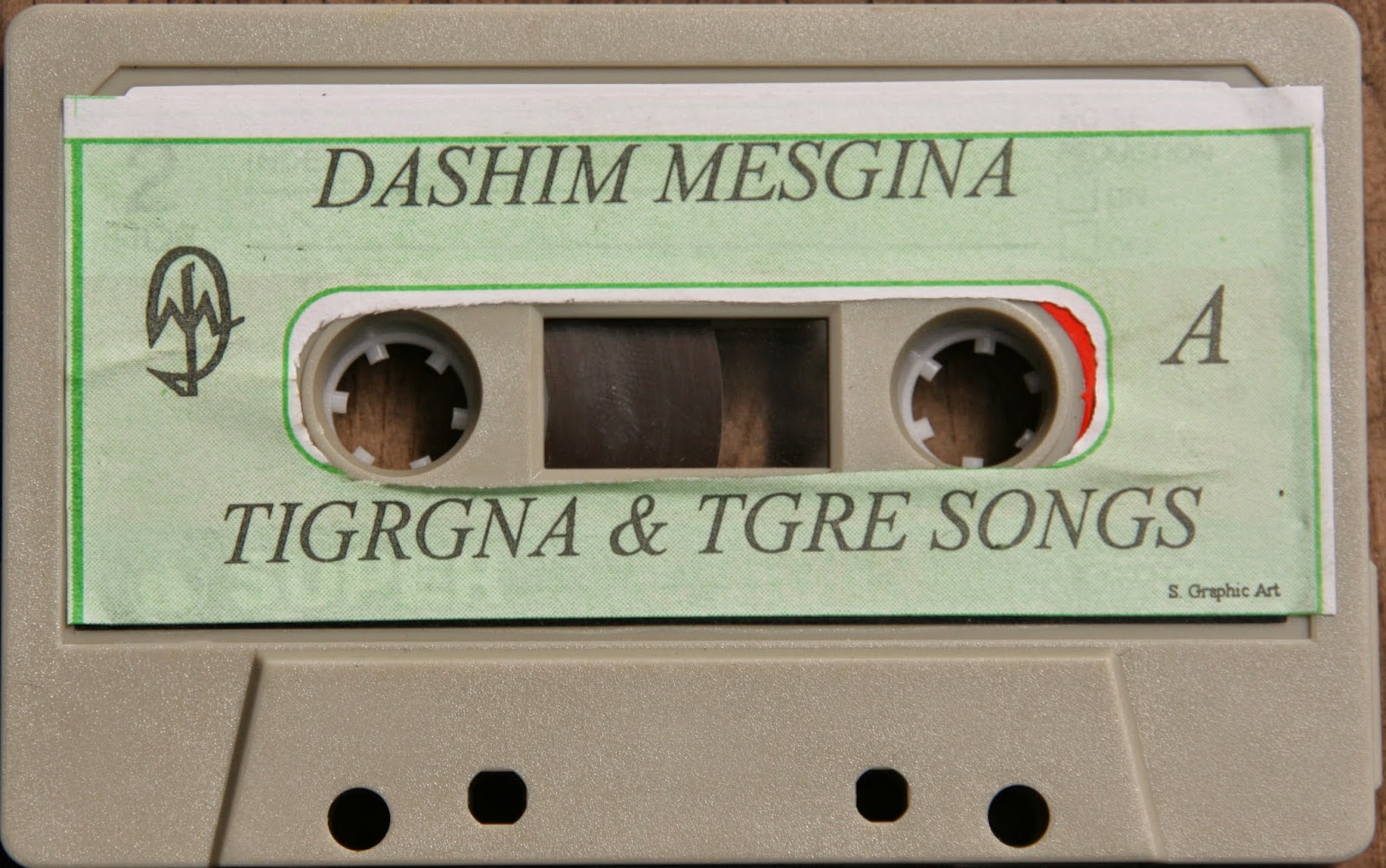 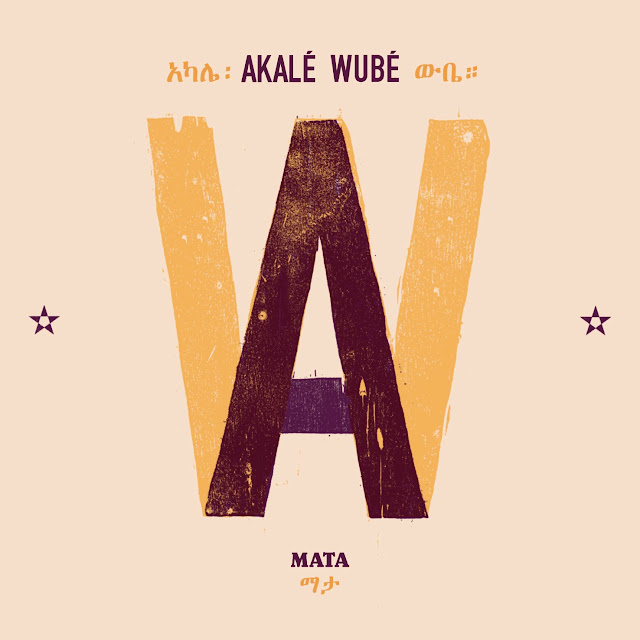 Akalé Wubé (meaning "my beautiful" in Amharic) is a quintet of musicians based in Paris, France who have been inspired to play "Ethio-Jazz" after drawing inspiration the Ethiopiques and other Ethiopian Jazz groups of the "golden age" throughout the sixties and seventies. They simply have taken older tunes to put a more modern contemporary twist by fusing in funk, tango, reggae, pop and other styles of music, already being an aesthetic in Ethiopian music, to help create their own unique sound.

Listening to “Mata”, the second album of Akalé Wubé, is like time travelling to Africa in the 70's. Their music take us to an imaginary musical territory halfway between the ethio-jazz that rocked Addis-Adeba at that time and have fascinated the West since and the Afrobeat from Lagos as conceived by the legendary Fela.

A further listen however makes us realize that it goes much beyond than just recreating the ethio-groove so much in fashion these days and the hypnotic sound of this Parisian band soon puts us in a trance. Integrating elements of soul, reggae, jazz and garage rock, Akalé Wubé sounds like a kind of Azmari Tortoise of Yoruba ancesters. Between reworked versions of classic songs by Alèmayu Esheté, Mulatu Astatqé or Getatchew Mekurya and own compositions, Akalé Wubé have achieved in 2 albums what many cannot do in a decade. They have defined their own style: a mix of refinement, mystery and virtuosity. Come on board Radio Groovalizacion. Next stop Paris-Adeba! 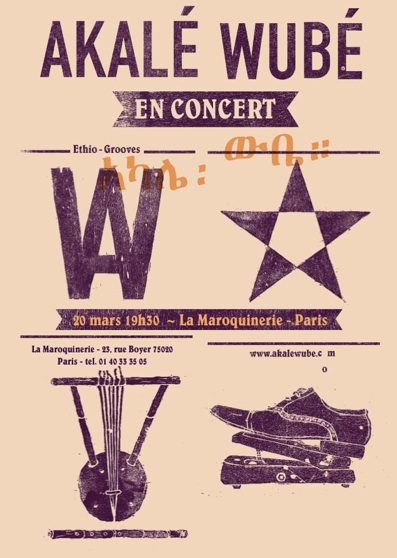 Few months ago I stumble upon this magnificent piece of work of Ethiopian singer Nini - Tigist Mekonnen Kidane.

It's virtualy impossible to find any piece of information about her. I don't even have proper name for her album. I am not sure is Akematlegn full name of Nini's album. Any help is welcome. 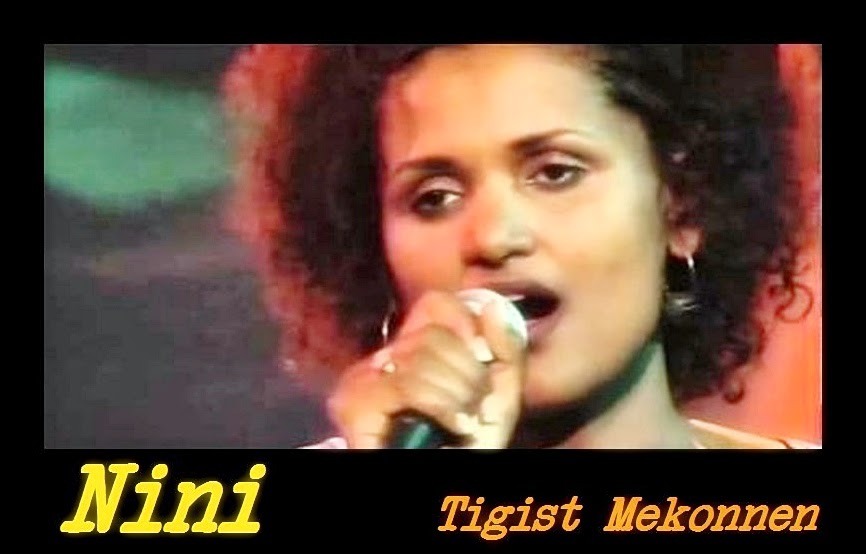 But, beside this lack of information and pictures, I have to share this album with you, becouse it's wonderful!

thanks to my readers,
more info in comments 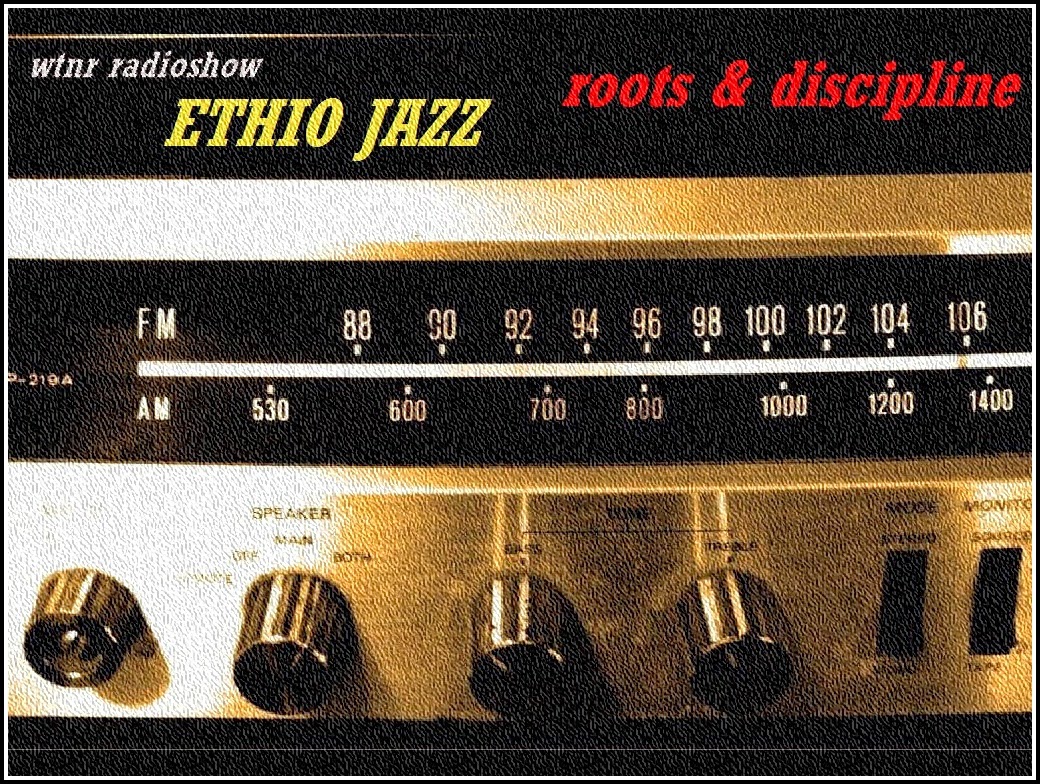 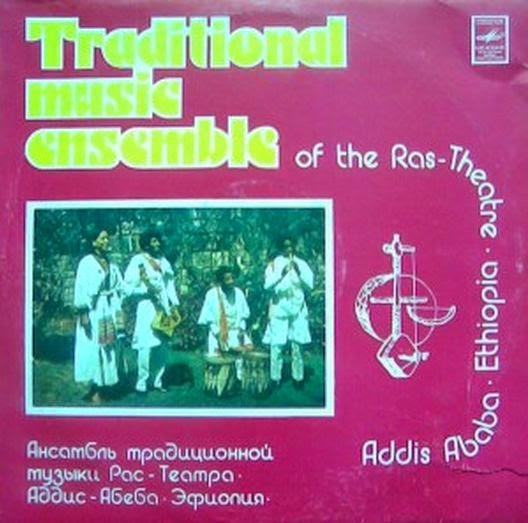 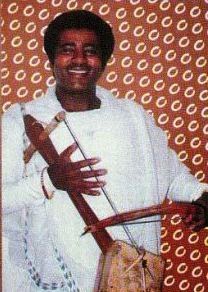 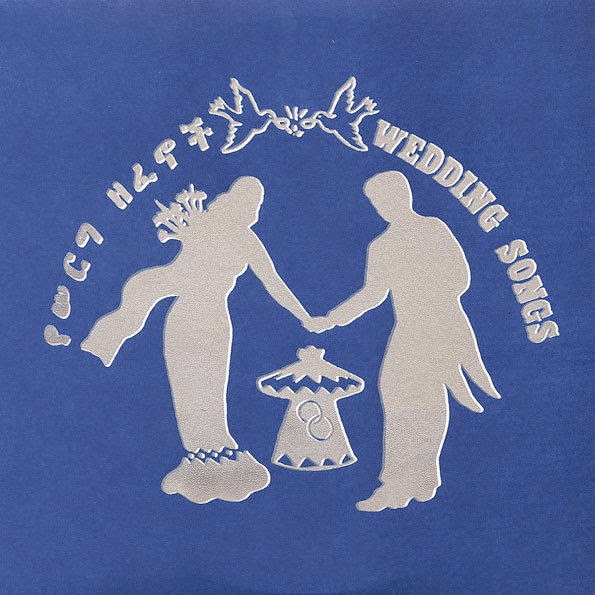 Originally released on Philips Ethiopia in 1973, this seemingly impossible to find LP is available once again to the lucky humans of the world.

With a mix of modern and traditional instruments these fourteen songs go through the progression of an Ethiopian Amhara wedding sung in Amharic. With the trio of singers, Lemma G. Hiwot, Zenebech Tesfaye, and Selamawit G. Selassie, alternating turns at the microphone, and sharing call and response duties, a relentless frenzy of hand clapping incites dancing and smiles. The consumption of tedj (honeywine) and the swirling love of a wedding was captured in the studio with euphoric energy to take away to play over and over again when the festivities are over. With hand screened covers and an insert of wedding photos accompanying the liner notes, this is the next best thing to an invitation to the real thing.

Originally released on Philips Ethiopia in 1973. A co-release with Mitmitta Musika of Addis Abeba, Ethiopia. 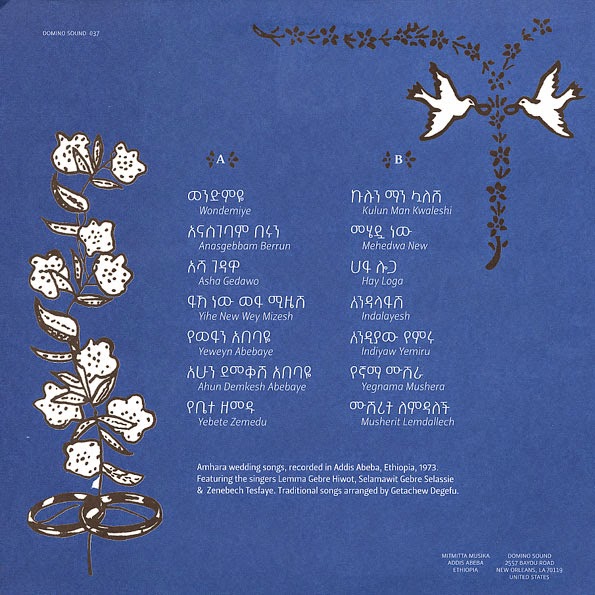 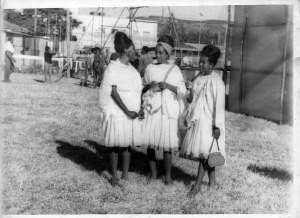 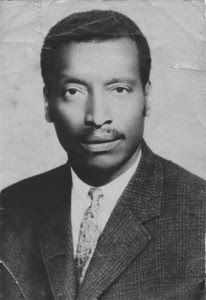 Sketches of Ethiopia is, extraordinarily, the first album Mulatu Astatke, the godfather of Ethio-jazz, has recorded with his own band for an international label of influence. It has been a long time coming and it is a corker. 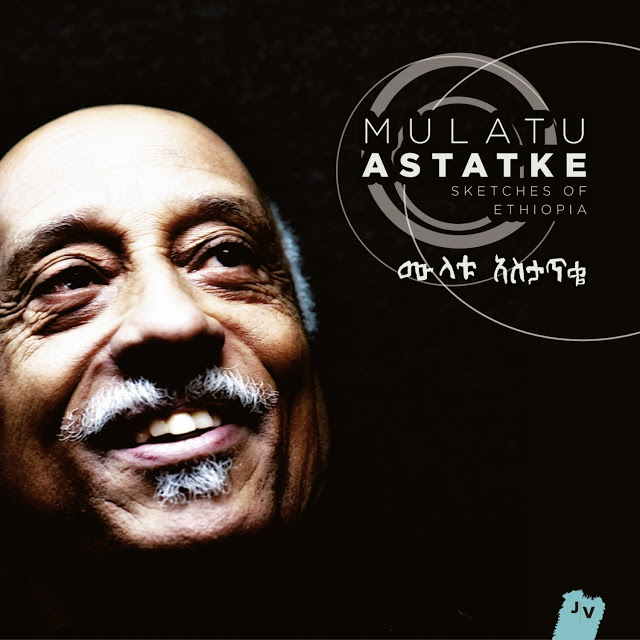 In addition, there are half a dozen guest musicians, who include rising Malian vocalist Fatoumata Diawara, who sings on the final track. 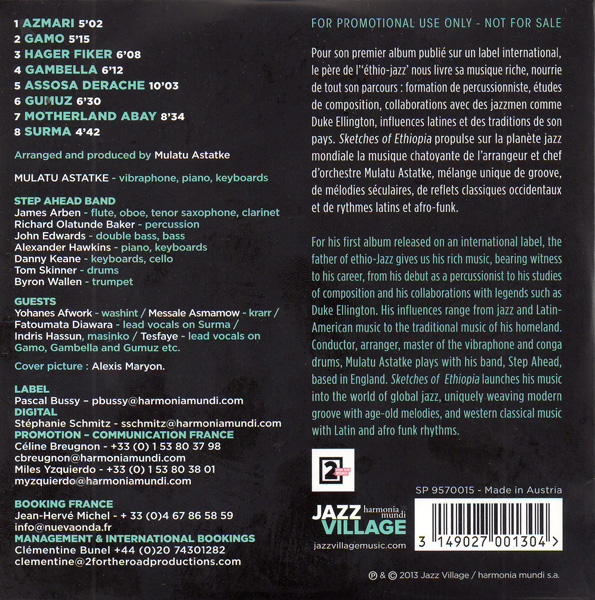 The album, a mix of originals and arrangements of traditional Ethiopian tunes, is generally hotter and more urgent than you would expect from Astatke’s classic early 1970s recordings. That vibe is revisited on two tracks: “Gumuz,” a traditional melody given a laid back, West Coast jazz-funk arrangement, and Astatke’s “Motherland Abay,” a showcase for the Ethiopian instruments. Elsewhere the album reflects Step Ahead’s up-tempo, dance-friendly live approach. The material is largely through-written and the emphasis is on the ensemble, as always with Astatke: composer/arrangers Duke Ellington and Billy Strayhorn were prominent among his formative jazz influences.


Born in 1943, Astatke studied in Britain and the US in the 1960s. He returned to Ethiopia towards the end of the decade, in the dog days of Haile Selassie’s imperial rule. State control of the music business was weakening and a handful of enthusiasts were setting up independent labels which the expiring regime lacked the energy to close down. But the audience for Astatke’s music was small, for Ethiopia had no broad tradition of instrumental music. In 1974 a military junta, the Derg, ousted Selassie and seized power. Under the Derg, Ethiopia’s fledgling music business was suppressed.


Internationally, Astatke’s fortunes improved in the late 1990s, when the Paris-based label Buda Musique launched its Ethiopiques reissue series. Volume four, Ethio Jazz & Musique Instrumentale 1969—1974, released in 1998, comprised album tracks and singles recorded by Astatke either under his own name or as arranger/bandleader.

People began to pick up on Ethio-jazz, among them US movie director Jim Jarmusch, who featured Astatke’s 1970s recordings prominently on the soundtrack of Broken Flowers (2005). In the film’s wake, Astatke toured and recorded with the Heliocentrics and Either/Orchestra.


In 2010, Mochilla released Timeless, recorded in concert in the US with leading local players.


Sketches of Ethiopia is essentially Astatke and Step Ahead’s live set performed in the studio by an expanded line-up. It makes the transition with resounding success. 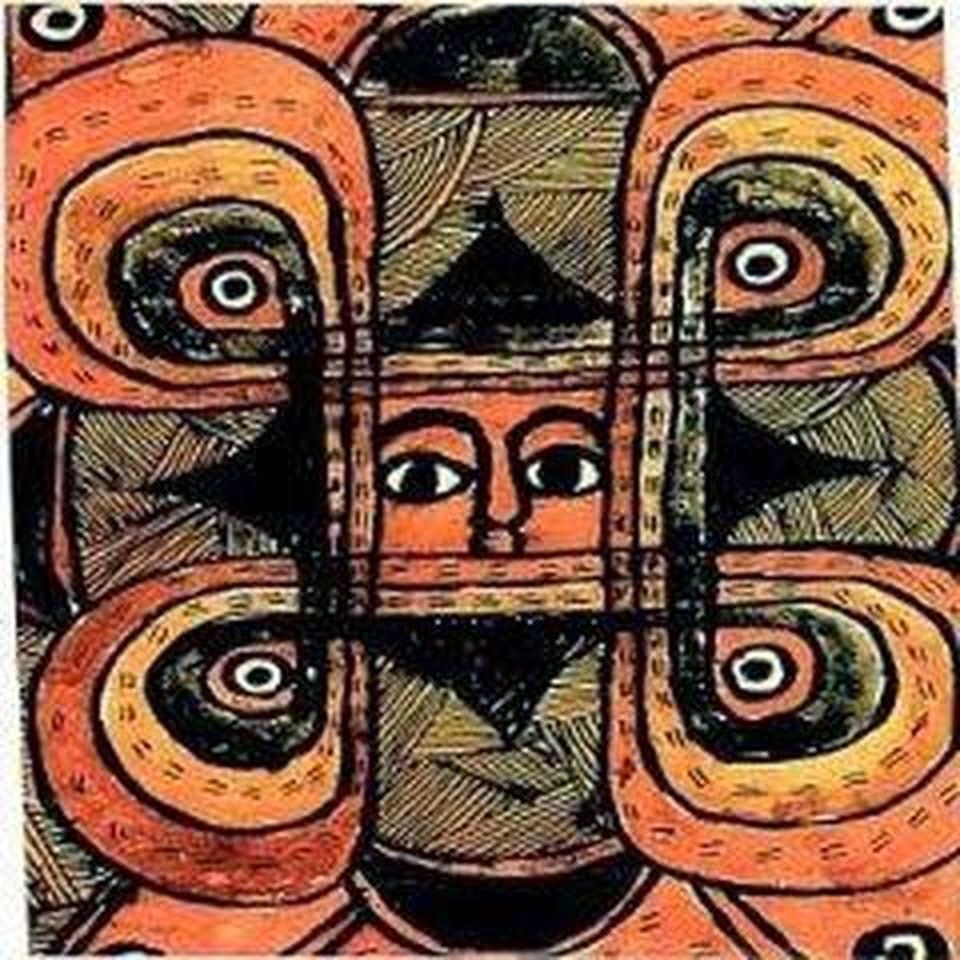 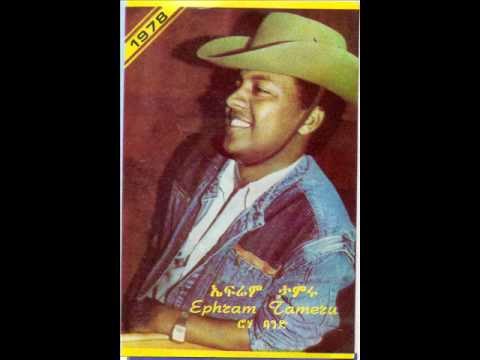 1978 is Ethiopian calendar, of course

2010 release, a superb Funk/Hip-Hop album from the Australian band Black Jesus Experience - Yelluinta fuses an irresistible blend of traditional Ethiopian song and 21st Century groove. The rhymes and chimes of the band deliver the musical strength and beauty of Africa through the vocal prism of Hip-Hop and freedom of Jazz. 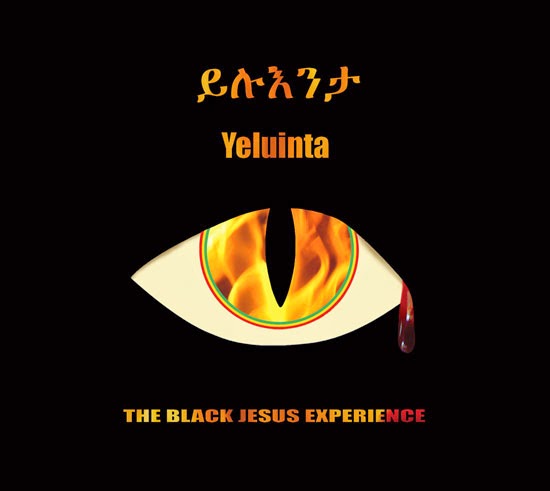 Black Jesus Experience (BJX) is an 8 piece band playing an irresistibly danceable blend of traditional Ethiopian song and 21st Century groove. As diverse as the 5 continents the members of 'BJX' hail from, their music reflects the multicultural vibrancy of the band's hometown, Melbourne, Australia.

When not touring BJX run a weekly session at cultural hub The Horn where BJX create new songs live on stage. The comfort BJX has with this practice lies in the improvising traditions of that feed BJX including Hip Hop, Jazz, Azmari and Rutu Pa'u.

The music is also fed quite literally before each performance by the ritual of a group meal prepared by singer Enushu and MD Peter Harper in the Ethiopian tradition, "those who eat from the same plate will not betray each other". This inspires and reinforces bonds musical, social and spiritual, bonds BJX invite their audiences to join.

Enushu began entertaining her local community as a child in Addis Ababa. Forced to leave Ethiopia, Enushu migrated to Australia bringing hauntingly beautiful compositions inspired by her remarkable life story and the unique vocal traditions of Ethiopia. Enushu is joined on vocals by poetic giant and lyrical miracle The Monk, Zimbabwe born and Outback bred.

Highlights for BJX include two tours of "the Motherland" Ethiopia, performing with Ethiojazz legend Mulatu Astatke in Europe and Australia (an association which won BJX and Mulatu "The Age Best Tour" award) Glastonbury and other great festivals.

The rhymes and chimes of Black Jesus Experience deliver the power and beauty of Africa through the vocal prism of Hip-Hop and freedom of Funk.