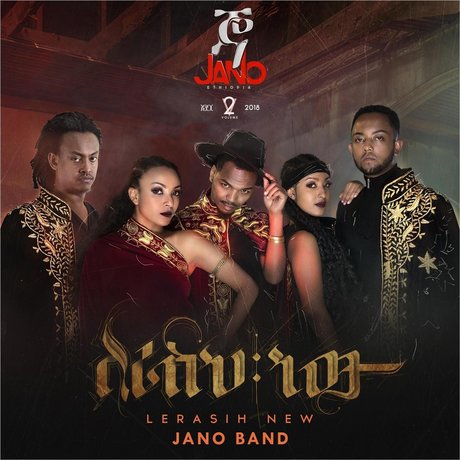 Jano Band transcend the Rock genre by infusing traditional Ethiopian melodies and percussions, adding instruments of masinko, krar, and the washint, and bringing you to your feet with unforgettable languages of love and celebration.

The band – which consists of two female vocalists, two male lead vocalists and six musicians on bass, guitars, keyboards and drums – was brought together by Addis Gessesse in 2011.

Since the release of "Ertale" in 2012 (also posted HERE), the group has collaborated and worked with American producer Bill Laswell who helped the group sparkle on the international arena.

In September 2017, news broke that the band was on the verge of a breakup. The band disputed the reports through its current manager Sammy Tefera who went on to announce that the band would be launching its second album in early 2018.

Music In Africa caught up with one of the band’s lead vocalists, Dibekulu Tafesse, to talk about their 16-track album, Lerasih New, which was released on 1 February 2018.

MUSIC IN AFRICA: What was the inspiration behind Lerasih New?

DIBEKULU TAFESSE: We named the album Lerasih New because it is a commonly used word which translates to 'For Yourself'. Our songs carry different themes that our fans relate to and in this album we choose to urge our fans to be conscious of their actions. As human beings we ocassionally do things without thinking about the consequences. So in this album we are pushing for self-awareness because no one should intentionally hurt themselves or ruin their lives simply because they made the wrong choice.

MUSIC IN AFRICA: Was the album produced in Ethiopia?

DIBEKULU TAFESSE: The assembling of the music, which is normally the first stage of recording, was done in Ethiopia but the engineering process was done in Italy at the Blumusica studio in Turin, and the final mastering was done at Lurssen Mastering Studio in Los Angeles, Califonia.

Working with good recording studios and producers has set us apart from other Ethiopian artists since the music that we produce is of high quality. On this project we worked with producer Kistet.

thanx for this nice discover

First time I've heard hard rock applied to some traditional Ethiopian elements, and it works! Thanks again for all your hard work on this blog.