The Life and Times of Menelik Wossenachew

December 24, 2009 marked the one year anniversary of the passing of the wonderful, incredibly talented singer, music writer and lyricist, Menelik Wossenachew.  Below is a piece I wrote for Horizon Ethiopia’s November issue.

What makes one artist a legend and another with equal or more talent obscure?  That was the question that popped in my head when I saw the reaction to Tilahun Gessesse’s passing.  Don’t get me wrong, I loved the man.  He was an incredible performer and had one of the best voices I’ve come across.

And I believe the reaction he received was well deserved. The question for me was, how come I didn’t see 1% of the same reaction when the veteran and amazing talent, Menelik Wossenachew passed away four months prior? A scan in the life and times of the gentle crooner might answer the question. 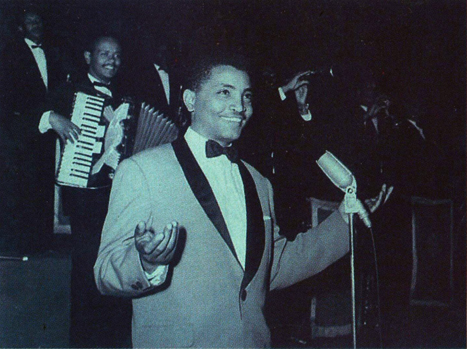 Menelik Wossenachew was born in 1940 in Addis Ababa, Ethiopia; although he grew up in the city of Harar where he went to a French school. Later on, he dropped out of high school and joined Alliance Ethio-Française in Addis Ababa for five years. In 1960 he joined the Haile Selassie I Theatre Orchestra.  He was fist hired as a backup vocalist but quickly became a favorite of the director of the Orchestra, the grandfather of all arrangers; Nerses Nalbandian.

The first two songs he sang on stage were Almaz Eyasebkush and Fiqer Lemn Yiqer. Other hits continued including Afer Atinfegign, Fiker Bastergwami, Yachi Lij Konjo Nat, Teyaqiyew Biaschegregn (Ene Wushetenew,) YeHarerwa WeTat, Fiker Ayarjim, and Sukar Sukar. The last two were written by clarinet player, Merawi Sitot and their music was taken from two popular Sudanese tunes.  Nerses Nalbandian was so impressed with Menelik’s vocal range that he had him sing opera as well.

Tebeb Teqami New was very famous as it was used as the opening to an education program on Ethiopian Radio. Around the same time period he recorded: Nefes Eko Nat (Sele Wubetwa Sadenq,) Asha Gedawo, Menew Bacher Qere, Eshet Eshet, Chereqa, Meqabren Liyew, Tizeta, Belew Bedubaye, Bati and Min Nekash. With the exception of Bati> and Min Nekash (Phillips Ethiopia) all of these tracks were recorded by Amha Eshete (Amha Records).  By this time, Menelik’s smooth as silk voice was gaining recognition and his ballads invariably left listeners wanting to hear more. 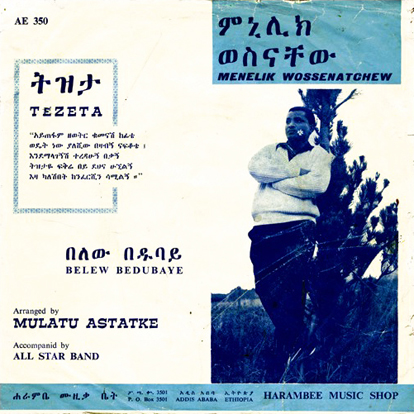 Parts of Lanchi Biye were recently sampled by the Somalian hip hop artist, K’Naan for his song America.  Chereqa(Moon) is a song based on the children song Chereqa Dembulboqa. The beautiful Meqabren Liyew (Let me see my grave) is an eerie song about Menelik’s wish to see his resting place before his death, an unimaginable thought to a majority of Ethiopians.

In the mid 70’s Menelik joined the Walias Band where his friend and old colleague, Girma Beyene was a member.  At that time the Walias Band was performing at the Hilton Hotel and Menelik was welcomed as a seasoned performer, regularly performing in Italian and Sudanese as well as Amharic. By that time though, the political climate brought about by the Derg’s revolution in 1974, had begun to make Menelik feel acutely uncomfortable.

Though he stayed several years after the revolution his unwavering independence made him a target from all sides of the political spectrum.  He decided to end his collaboration with the Haile Selassie I Theatre Orchestra and the Walias Band and go on a self-imposed exile, first to Sudan and later to Egypt. Though he became a distant figure to his fans in Ethiopia, he became a sought after performer both in Sudan and Egypt.

After a total of 14 years in exile Menelik returned to Ethiopia in 1993 with the help of Mohammed Al-Amoudi, the Ethiopian-Saudi businessman.  In 1995 Menelik Wossenachew released a CD entitled, Gash Jembere on Ethio-Grooves record.  The CD was a compilation of his best hits including the title track which Menelik sang as an ode to Mohammed Al-Amoudi for his kindness and assistance shown to him.  It should be noted that Gash Jemebere was a taxi driver near the Itege Hotel (named Awraris Hotel during the Derg) who was known for his kindness. 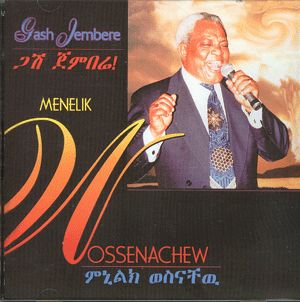 Apart from special occasions Menelik didn’t perform. I was very fortunate to see him perform one song, Teyaqiyew Biaschegregn (Ene Wushetenew,) in Addis Ababa for the Millennium (GC) festivities. The man still had the voice. One of the last shows he performed was at the 50th Anniversary celebrating the creation of the Haile Selassie Theatre in December 2005.

Menelik Wossenachew’s private life was just that, private!  Getachew Debalqe, his friend and old colleague remembers Menelik as a very discreet and shy person but a very talented soul.  He shares a story how one of Menelik’s brother was surprised to see Menelik perform live at the theatre as he was not aware of his sibling’s musical career at that time.


Menelik remained a bachelor up until his death and was known to have fathered several children.  Menelik died on December 24, 2008 from pneumonia.  He was contemplating a comeback and had gone to South Africa to fix an ear problem. Girma Beyene, upon learning of Menelik’s passing, paid the ultimate tribute to his fallen friend.

“He was a one man show.  Not only was he one of the most talented singers I came across but also one of the smartest [Menelik could speak Amharic, Tigrigna, English, French, Italian and Arabic]. I’ll miss his kindness, his voice and above all I’ll miss his friendship.” 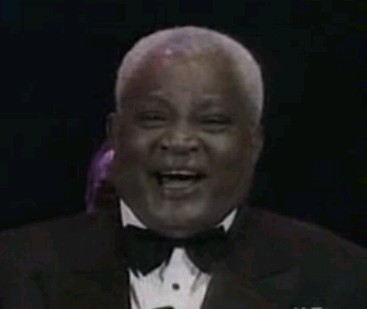 So coming back to the question I raised on the onset of this piece.  Why fame for one and obscurity for another?  I guess there are no clear answers. Maybe its luck or because he had stayed away from music during his exile or that he didn’t have quite the discography as others (Tilahun Gessesse, Mahmoud Ahmed, and Alemayehu Eshete) or that he didn’t jump start his career upon his return. Whatever the reason in the end what is important is that his contribution to the development of contemporary Ethiopian music should be recognized and not forgotten.

Respect for writing a post about this legend. We should totally create a Wikipedia entry for him.

A great man. I agree he deserves more. #RIP

Thank you for this. There is not much on the web and this was the most informative. I came across his music recently on hearing Fitrackshin. What language is he speaking and what is he singing about? Any English translations?